In the previous house construction post, we saw Guy Jolin install a temporary roof on the foundation for the winter. The special 'traditional' stone foundation had been installed by skilled masons with experience in this type of work.

With the arrival of spring 1962, we witnessed some of the growing piles of lumber for the building of the house's main floor and roof.

As we have seen, my grandfather didn't simply ask a general contractor to build him a house. Instead he researched construction methods, and assembled a large construction library to understand the tools and techniques to be used. He performed many calculations to understand the materials to be ordered and the best way to meet building specifications. No doubt he quizzed or debated some of the construction professionals he employed at length - in his heavily-English-accented French.

As most of the receipts and most of his calculations have survived over half a century, I feel some kind of compulsion to understand or explain how - or why - he put so much effort and money into building his small dream home with .. 'the best view on the lake' as my father would often say. 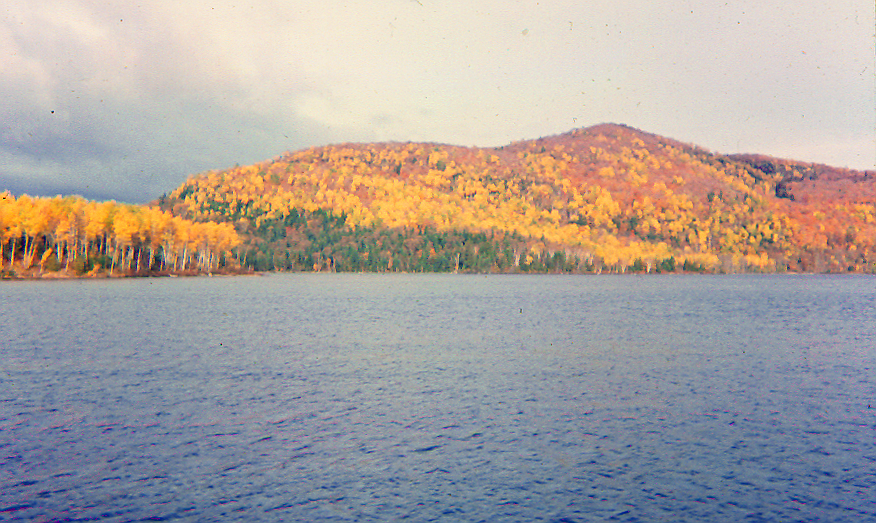 I also enjoy making the old invoices and other documents available on-line because they preserve old names and old businesses .. and record the gradual ending of the long era of human history during which people conducted their business and performed their calculations .. by hand on paper. 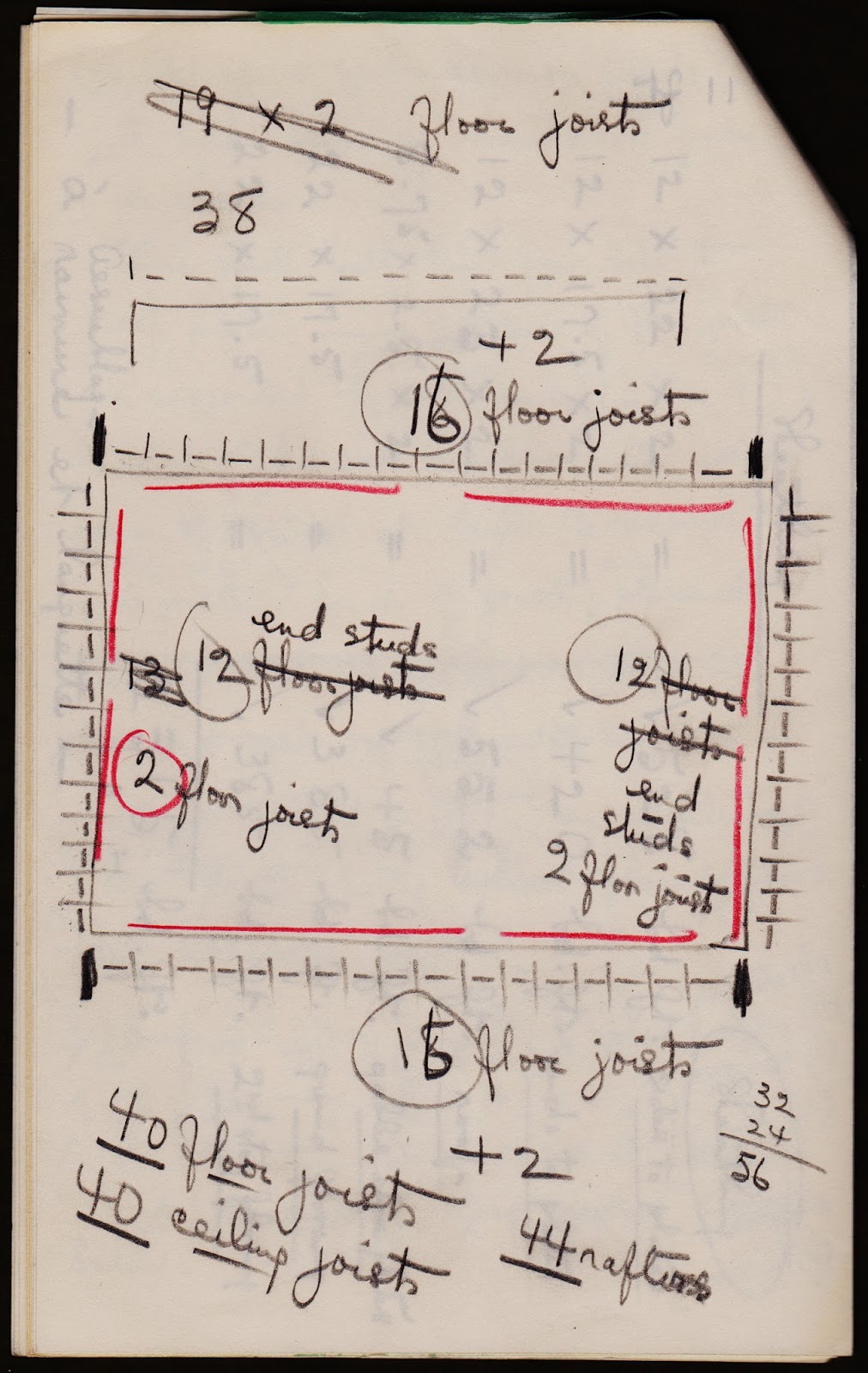 During the winter of 1961-62, my grandfather refined his calculations and made revisions to his lumber orders and inventory. 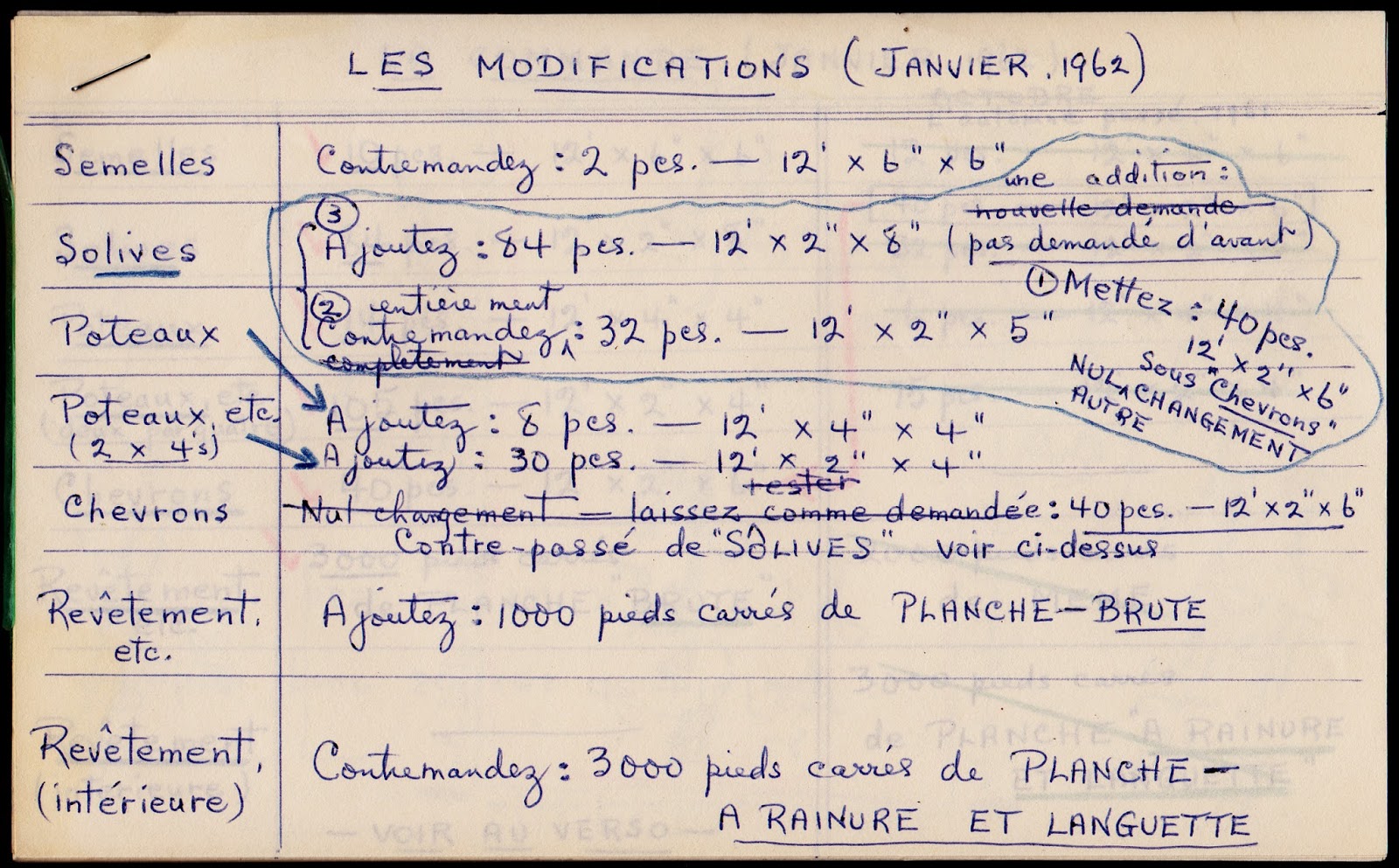 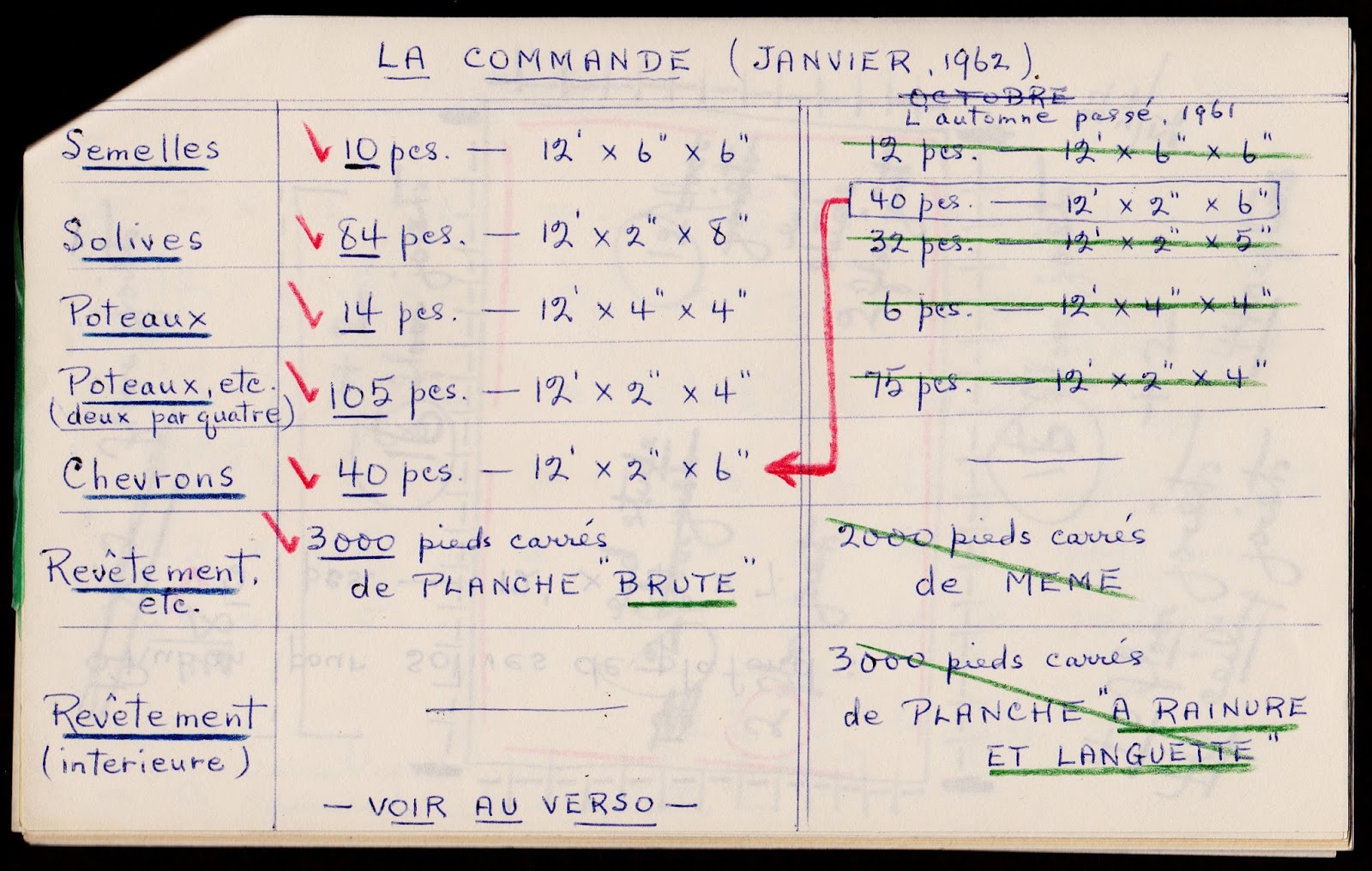 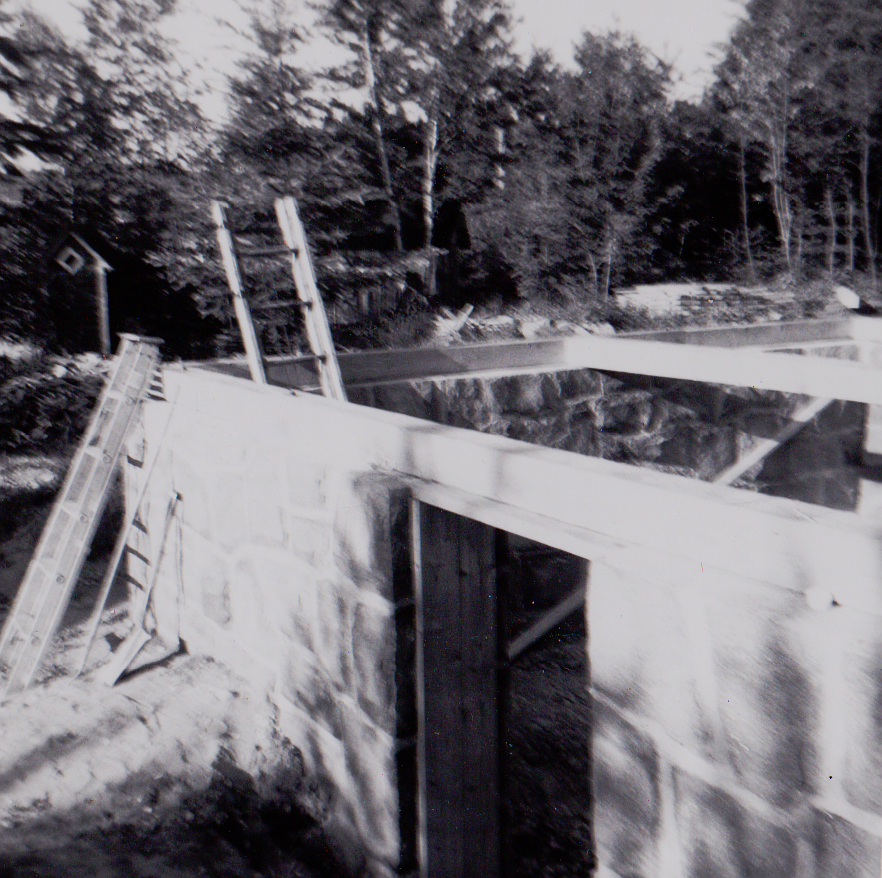 A view of the foundation in the sunrise. The winter roof has been removed and some kind of construction activity is imminent. 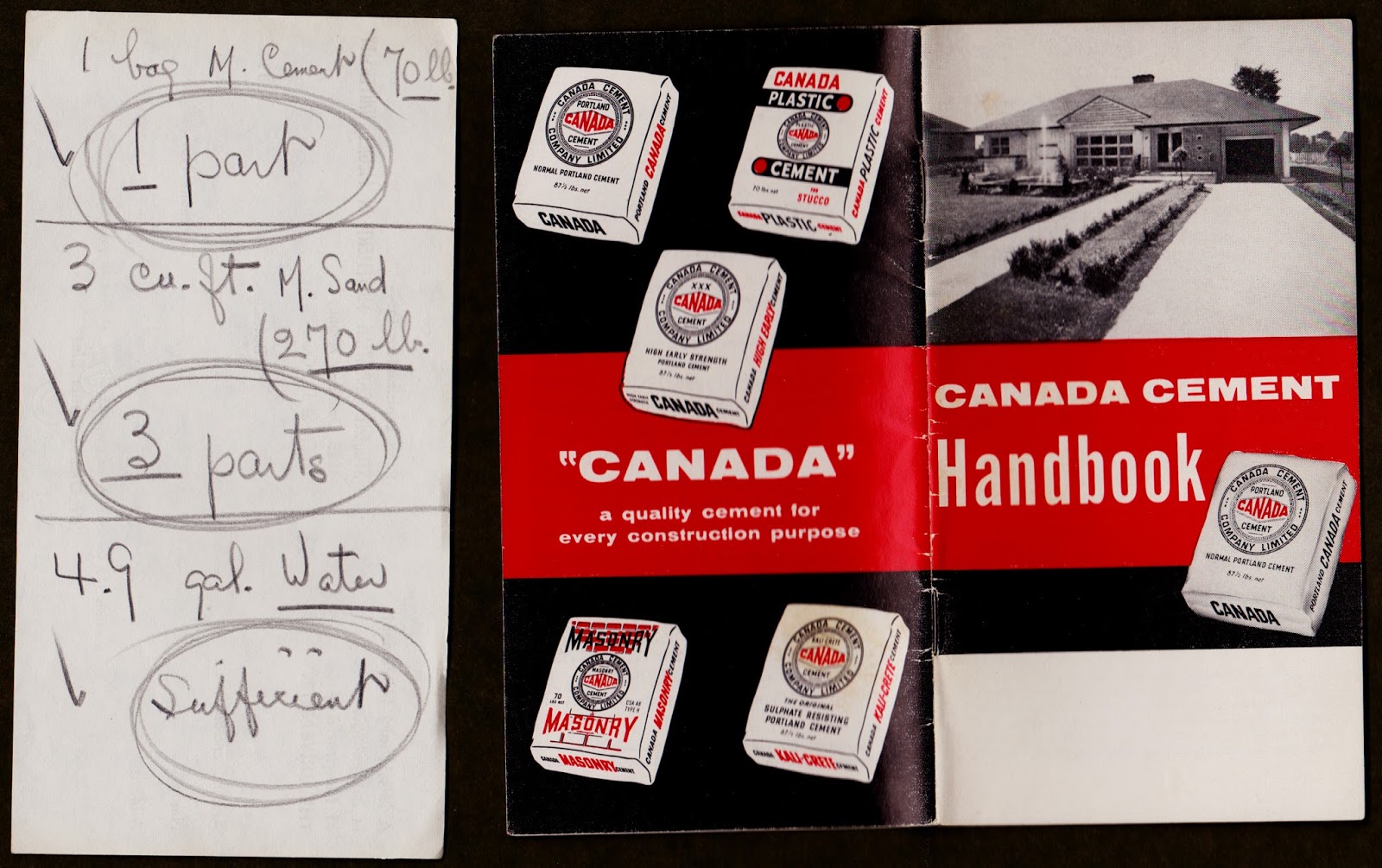 It's time to mix concrete and pour the bases for the floor supports .. and the base for the concrete block chimney - the latter will be lined with clay tile pipe. The chimney will be used for the oil space heater exhaust. 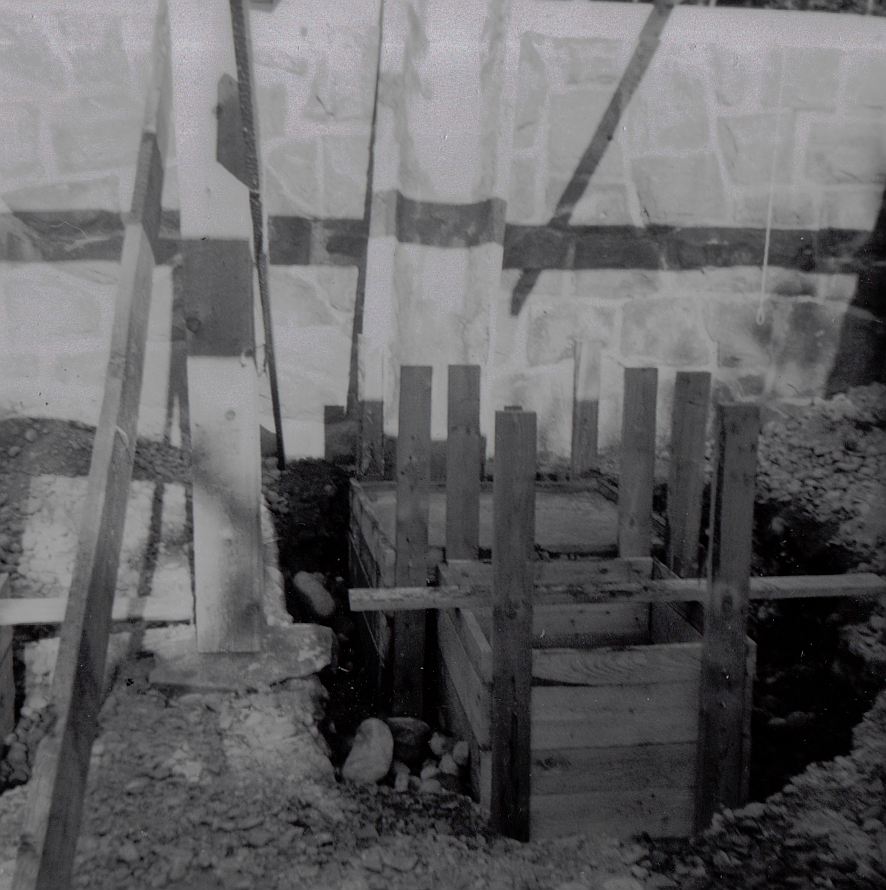 The concrete chute is at the back at the foundation.
Next is the base for the chimney.
One of the floor support base forms is closest to the camera. 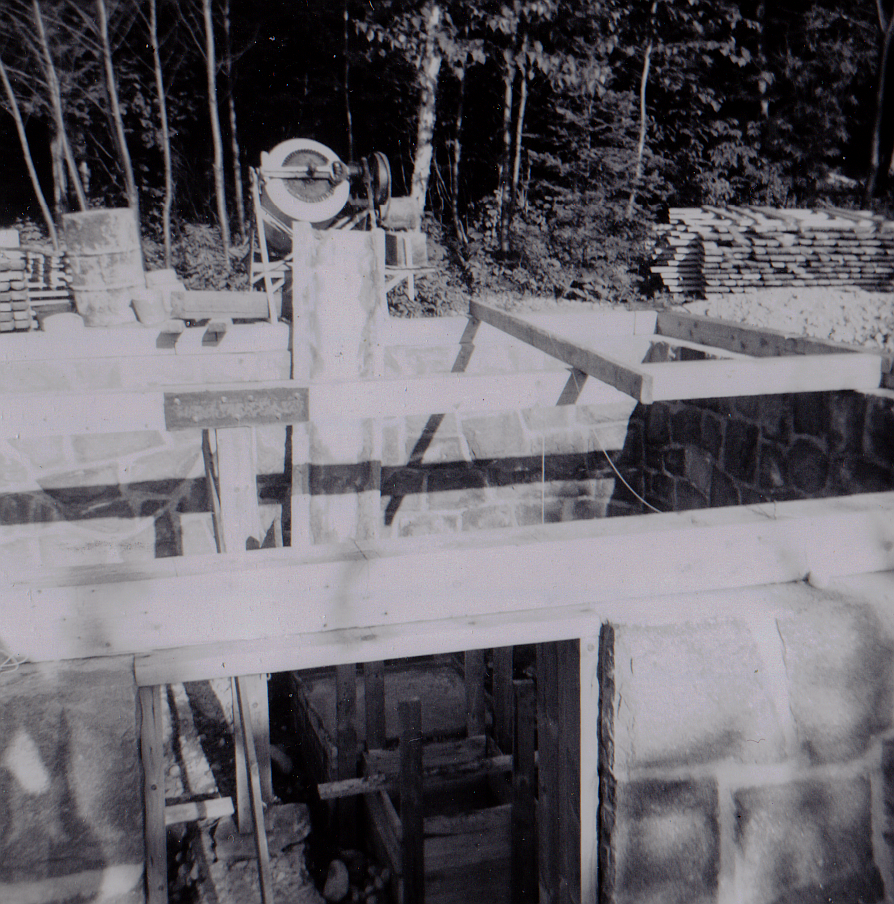 This photo shows the same scene from outside the eastern door to the basement. 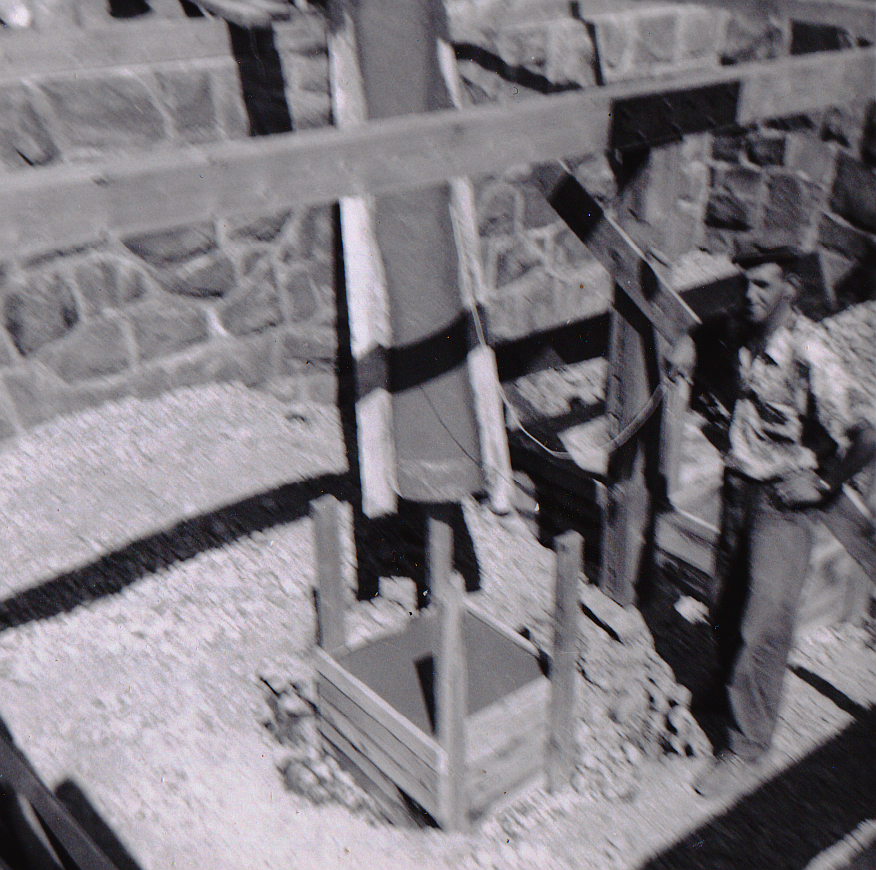 As usual (at least on this project), the skilled worker pauses to have his photo taken.

Unfortunately, there is no record of his name or I would have included it. 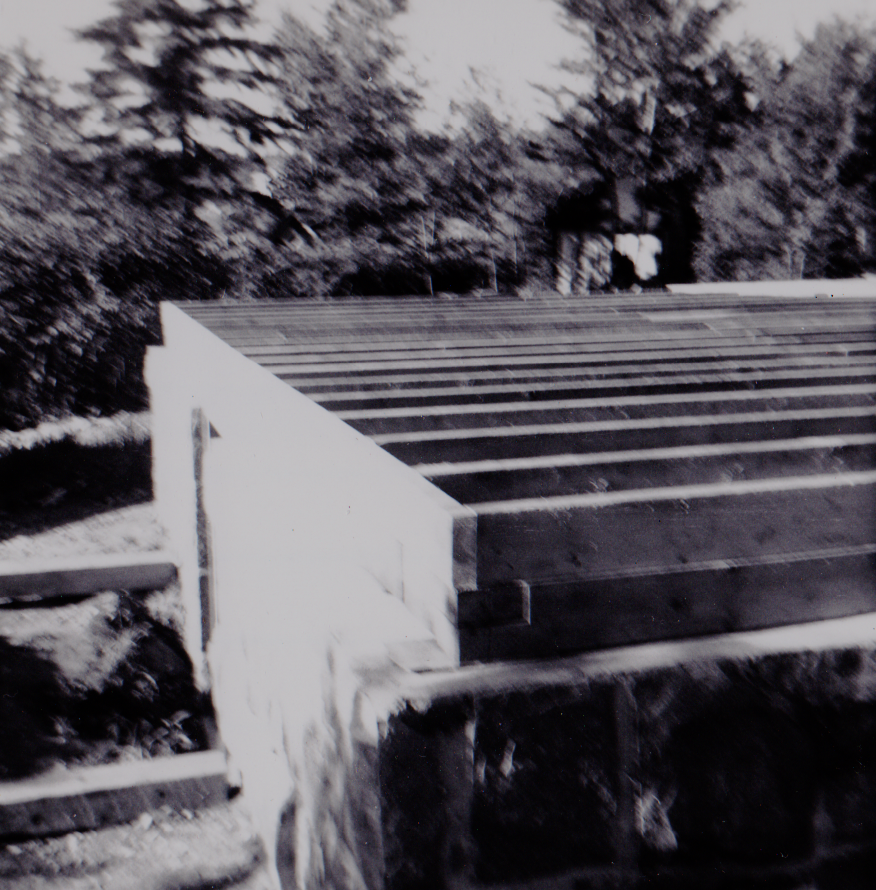 On another day, again near sunrise, the lumber has been fashioned into floor joists, probably by carpenter Guy Jolin. 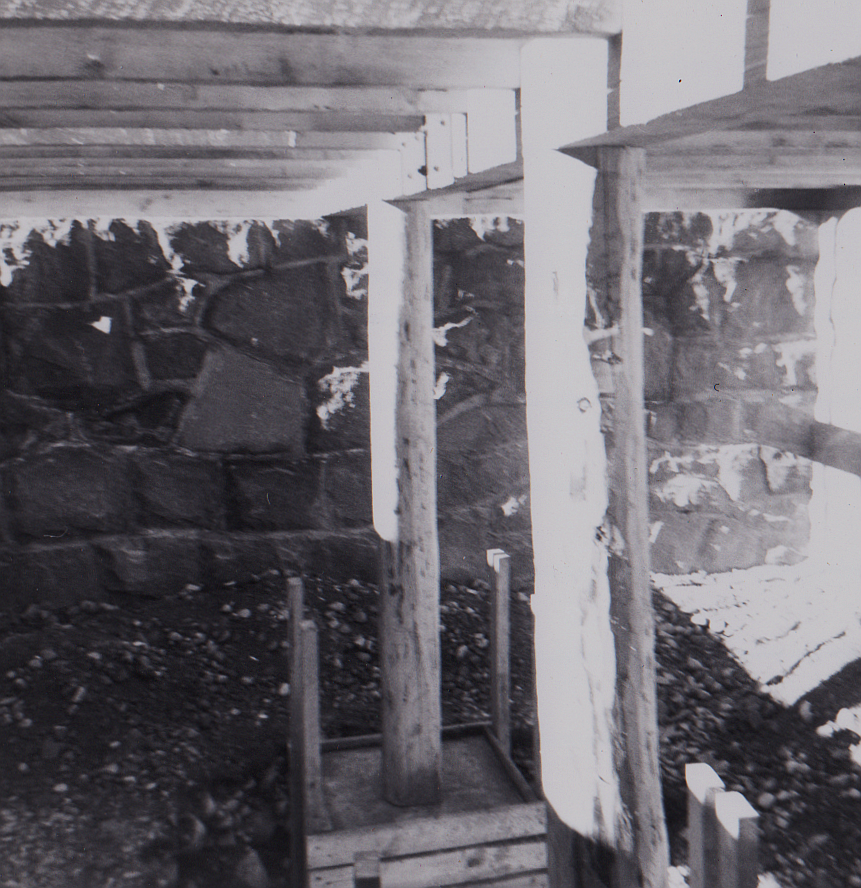 .. and we see the application of the floor supports to the completed and cured concrete pads. 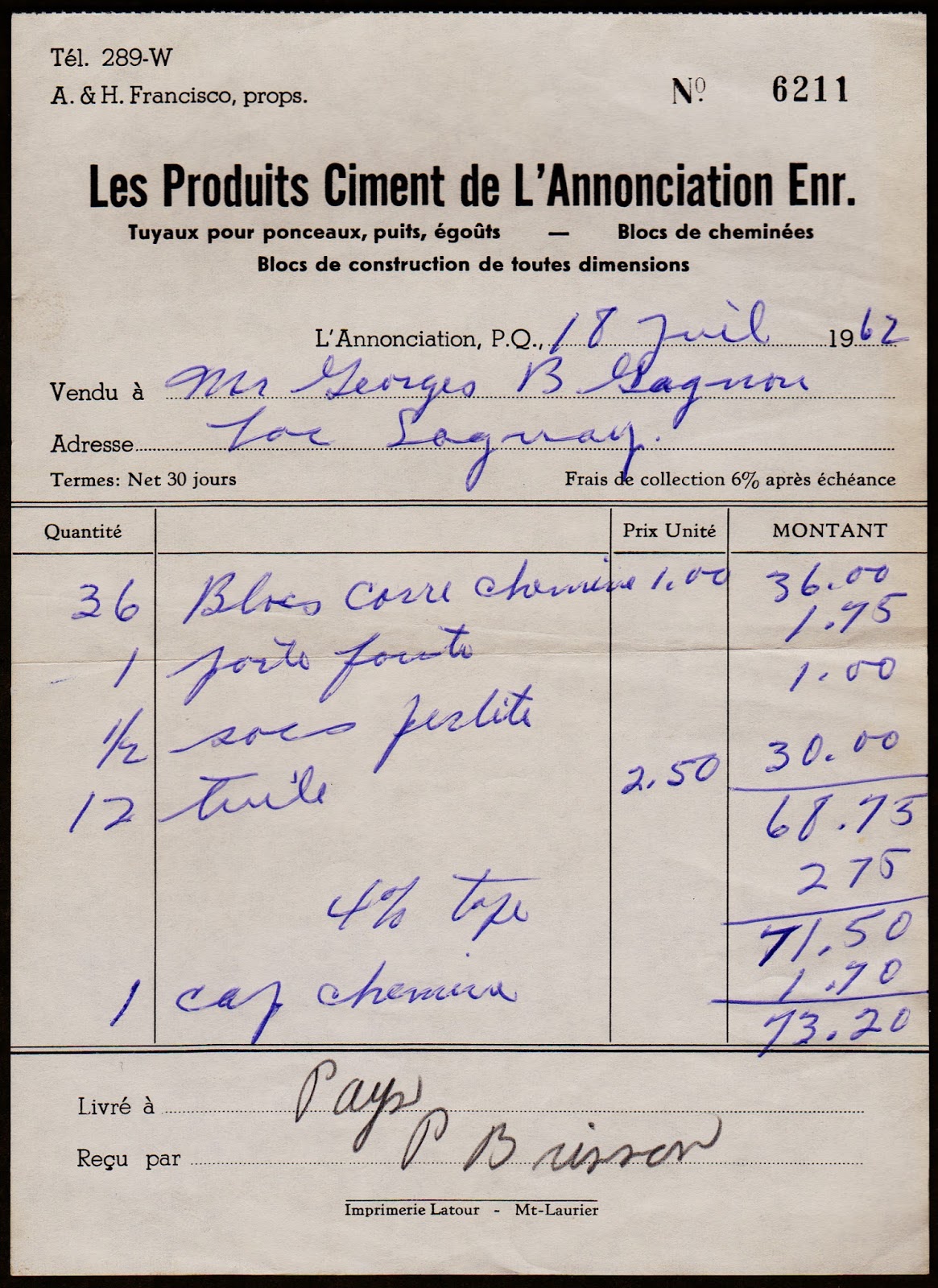 Some of the chimney supplies were being ordered. 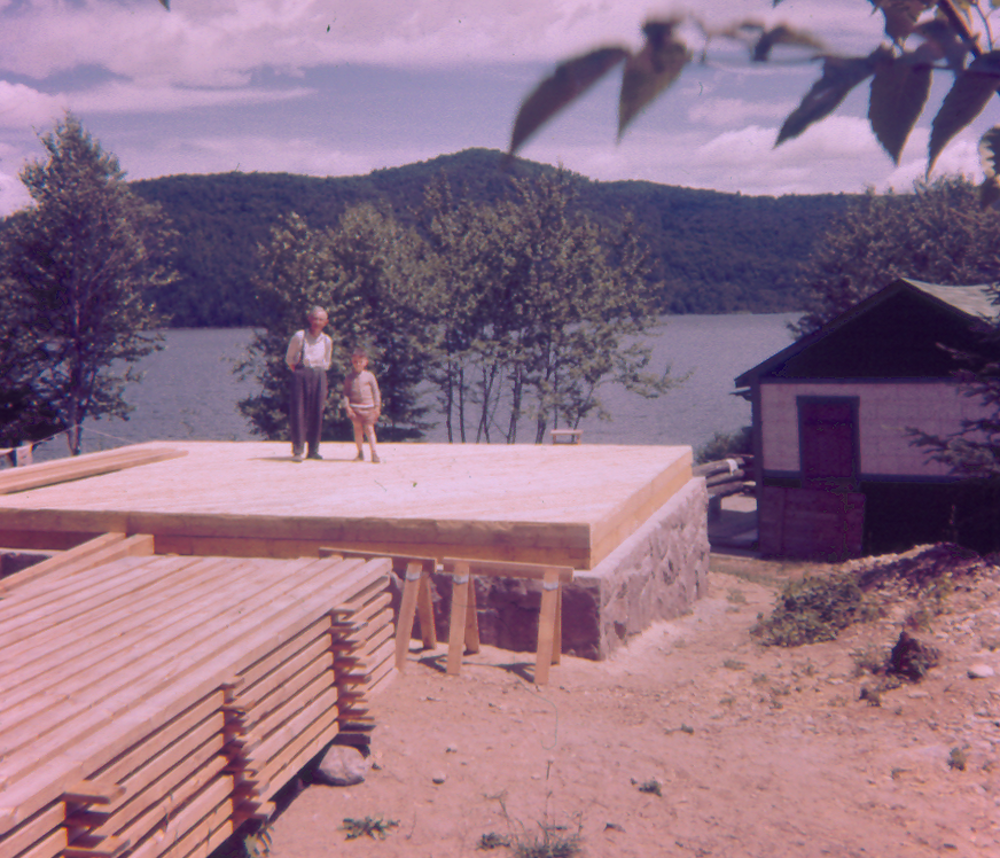 In July, my father and I rolled into town in his new 1962 VW Beetle.
The main level flooring was complete.
No doubt my father was photographing from the top of another pile of lumber. My grandfather (left) and Guy Jolin raise the west frame. 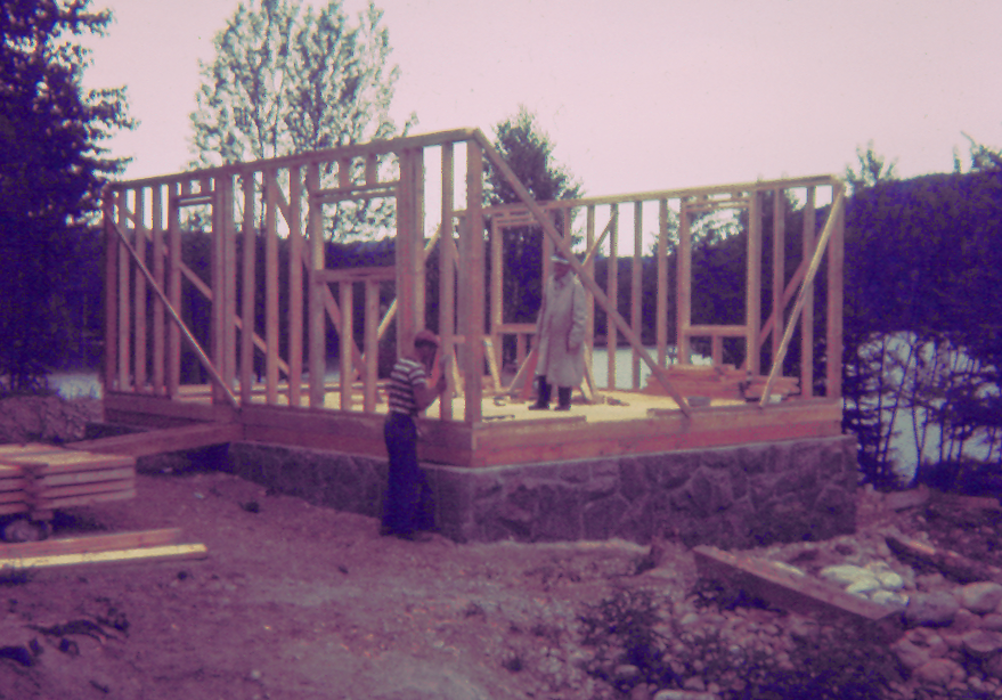 It was raining off and on this afternoon.
The sounds were typical of the Canadian wilderness - silence prevailed.
The sounds of hammer blows didn't bounce off nearby walls, they echoed back from the silent forest.
You'd hear the odd distant cawing of a crow.
Occasionally the low whine of truck tires would build and fade away on the nearby highway. 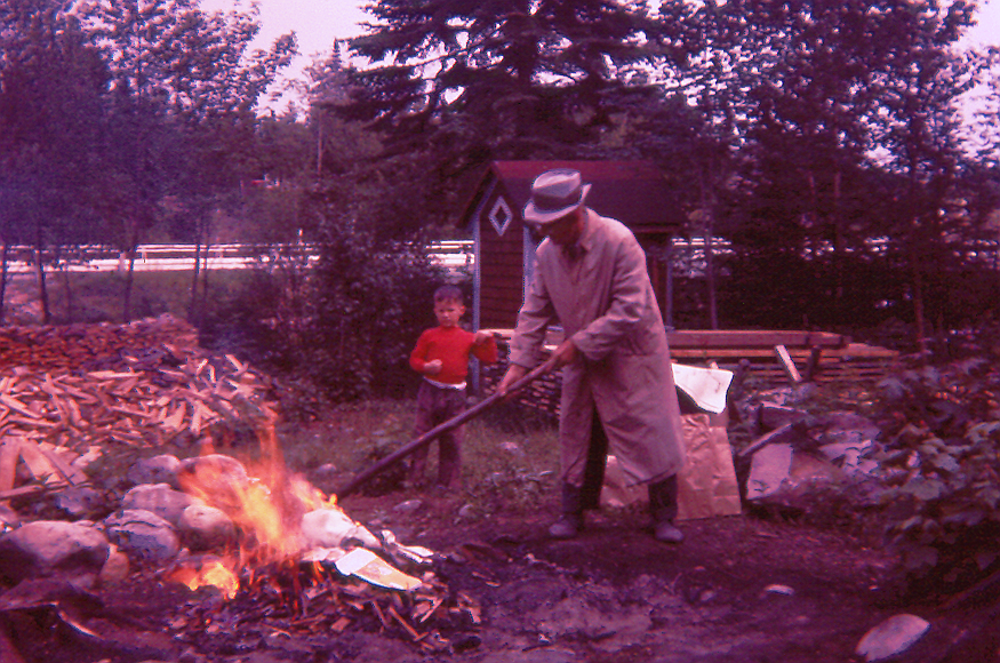 A wet day is a good day for a rubbish fire - municipal services were very limited.
The combination outhouse and kindling shed is behind us.
The white railings of the municipal dock are behind that.
My grandfather kept his material piles orderly.
The far pile of cut-to-length tree branches for the old cottage's stove would have been cut with a handsaw.
I always enjoyed fires and the aroma of woodsmoke.
At one point I got a whiff of this fire and was surprised by its strange, bad odor. The chimney and first floor support footings are shown with their wooden forms removed.
Setting up this photo was a long trip into darkness and irregular walking for which I needed help.
We entered through the eastern basement door - the staircase between levels would someday be installed along the north wall at the right.
With little understanding of engineering, documentation or history, venturing into this cave to experience a blinding flash of light didn't make much sense to me at the time.

So far, the construction had all been performed without a connection to the electrical grid.
Looking closely at the photo farther above, you'll see that the cement mixer was turned by a truck battery. 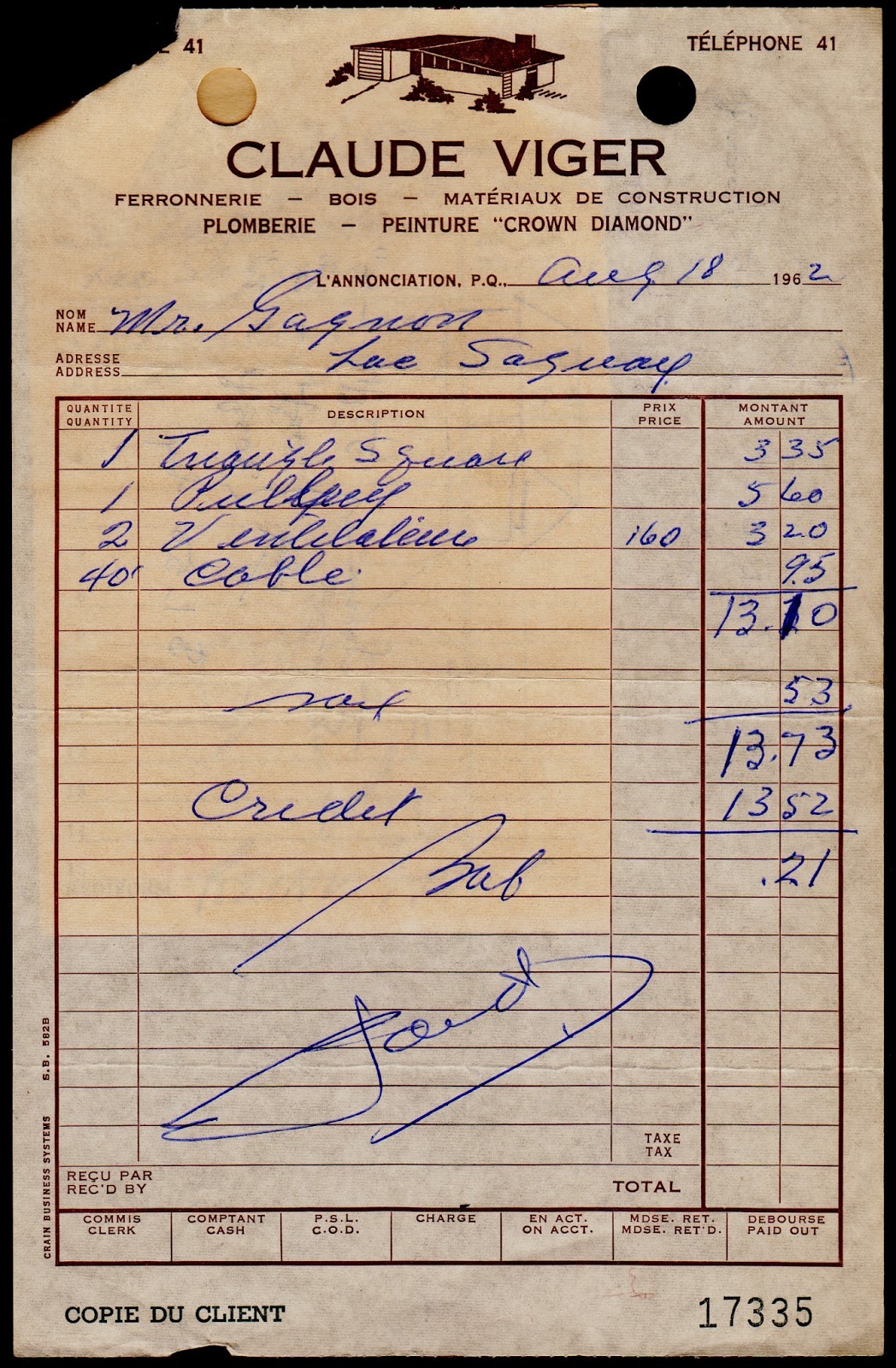 Some of the actual hardware needed to erect the chimney. 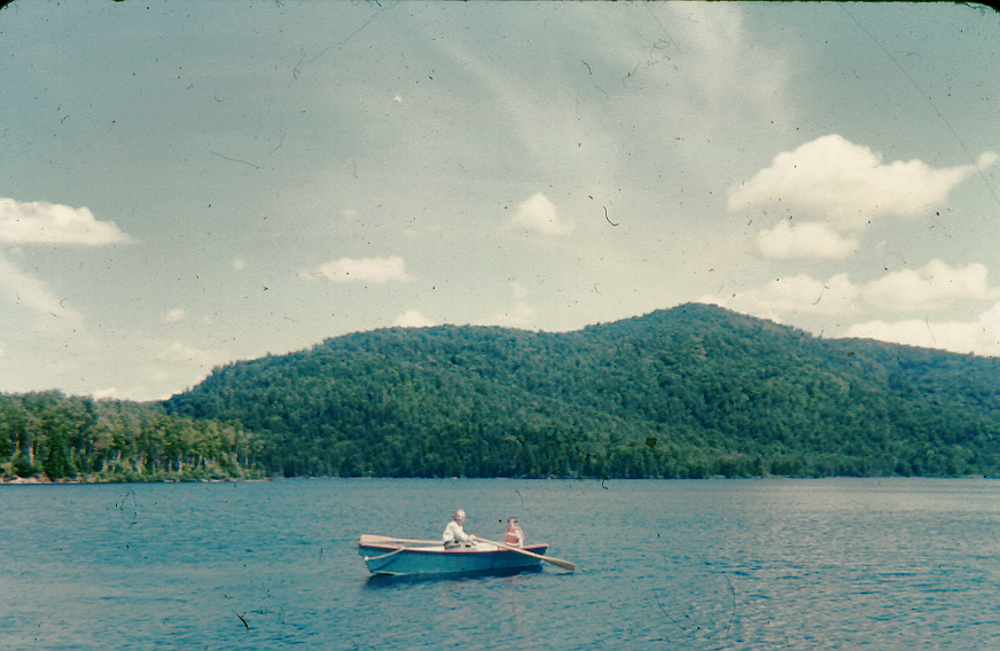 At the beginning of August 1962, my grandfather and I have just manoevered in a counter-clockwise arc to pose in his new rowboat.