Foundation by M Richard, B Guindon and the Plouffes - Sep-Oct 1961

The former Moquin cottage couldn't be modernized or winterized and was also too small.

G B Gagnon took several pictures of the construction. The first ten pages are in chronological order, going by GBG's numbers on the back of each picture.

The later pictures are in approximate order because GBG didn't get around to numbering them. He was busy getting his place ready for the coming winter 1962-1963.

Notice how thin the topsoil is, and how much glacial gravel permeates the subsoil. My grandfather did a lot of the physical work required (e.g. stone rolling) with Mr Richard and enjoyed working with him. 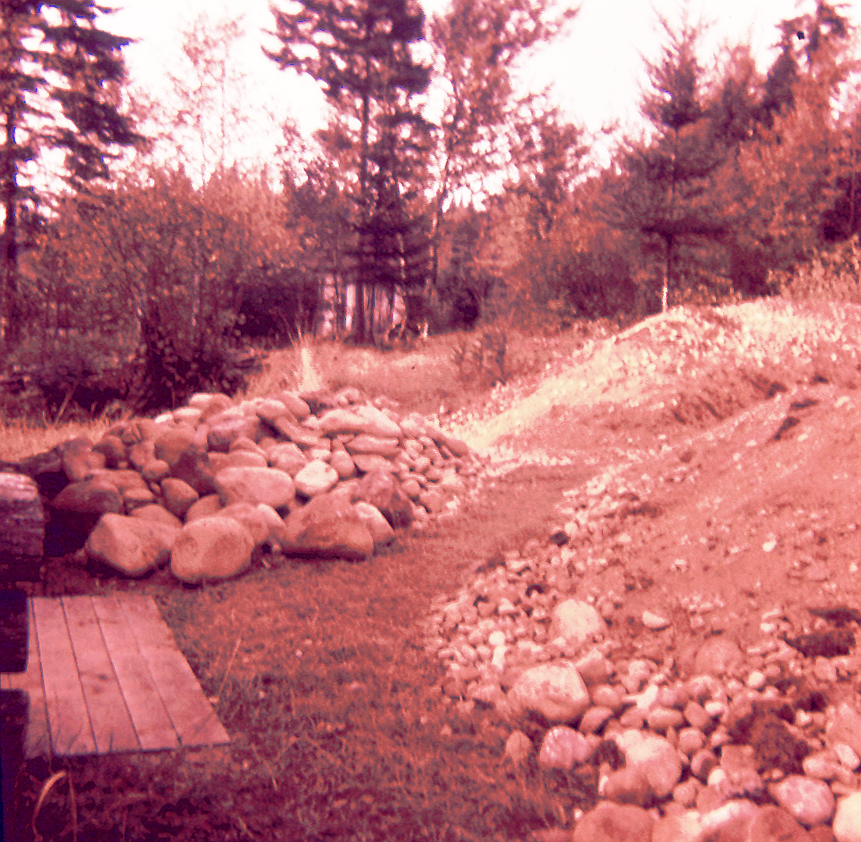 September 1961 - Stones from the excavation - slide by LC Gagnon

It must have been very difficult digging through the subsoil with this much rock content.
The edge of the original cabin's front porch is shown at the left margin.

It is unfortunate that more of these calendar pages were not preserved.
The cellar excavation by Messrs Richard and Guindon is documented. With winter fast approaching, my grandfather seems anxious about getting started on the foundation. But, as we know .. with highly skilled workers, you sometimes have to wait. 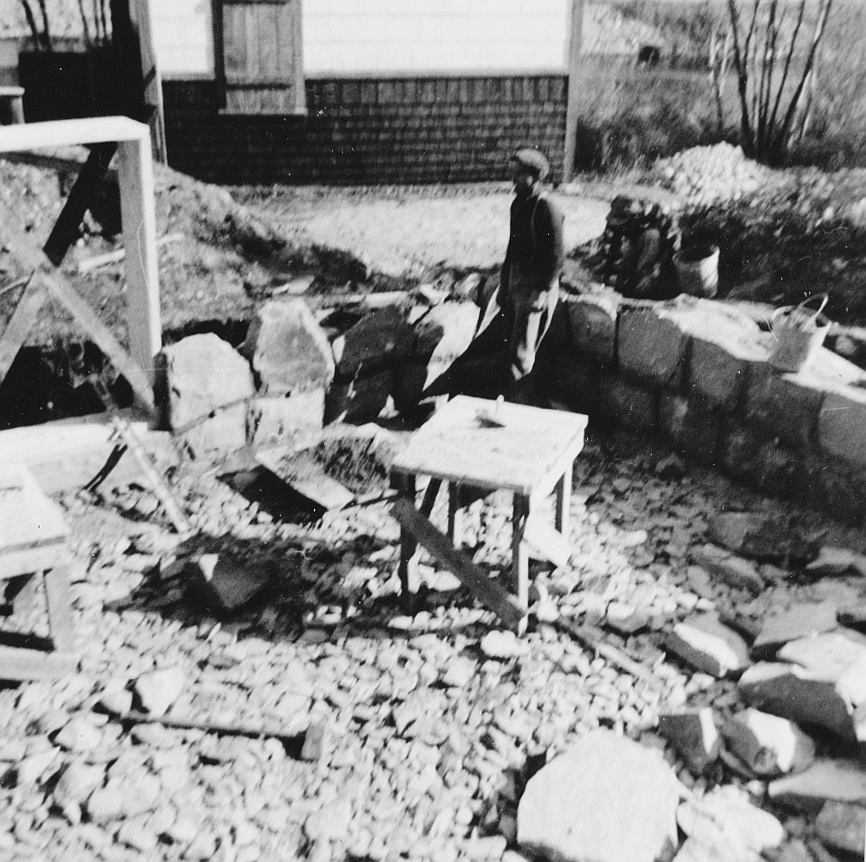 The photo shows the edge of cottage with winter shutter in place. 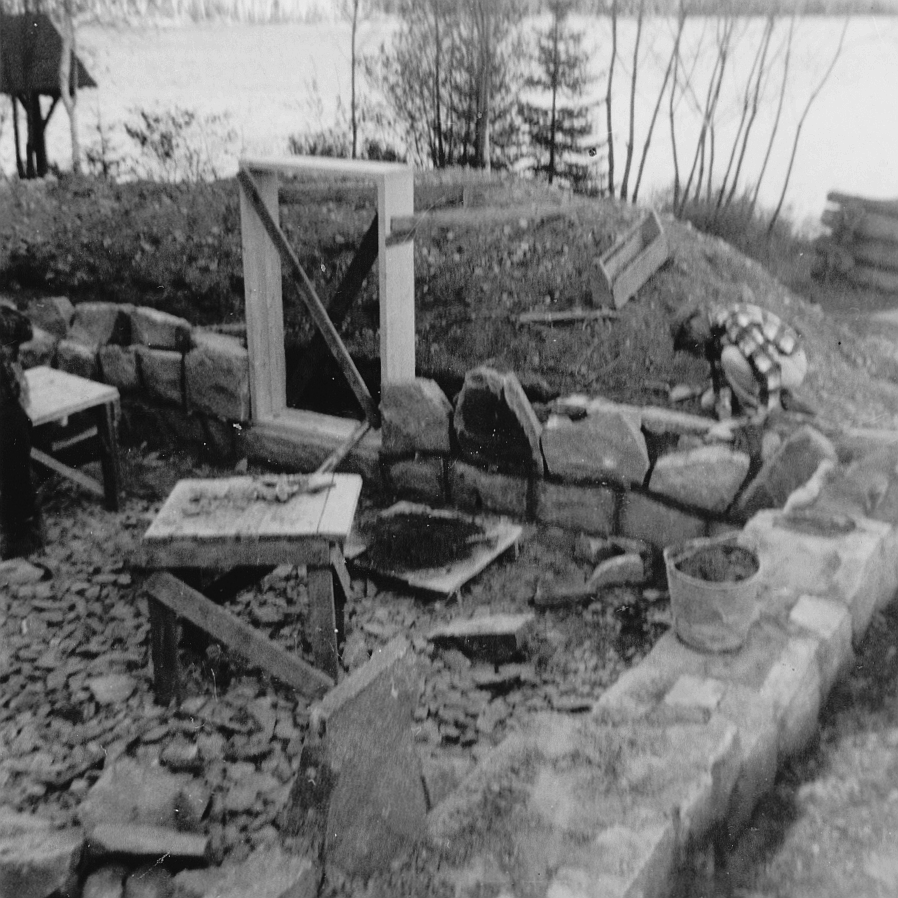 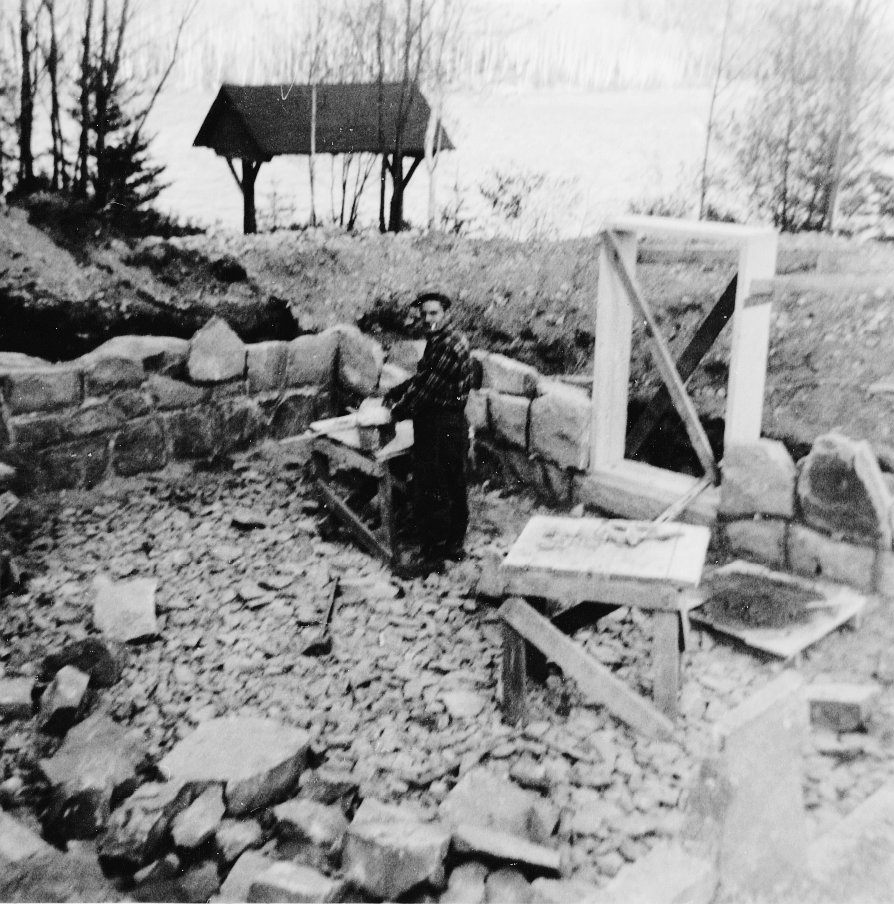 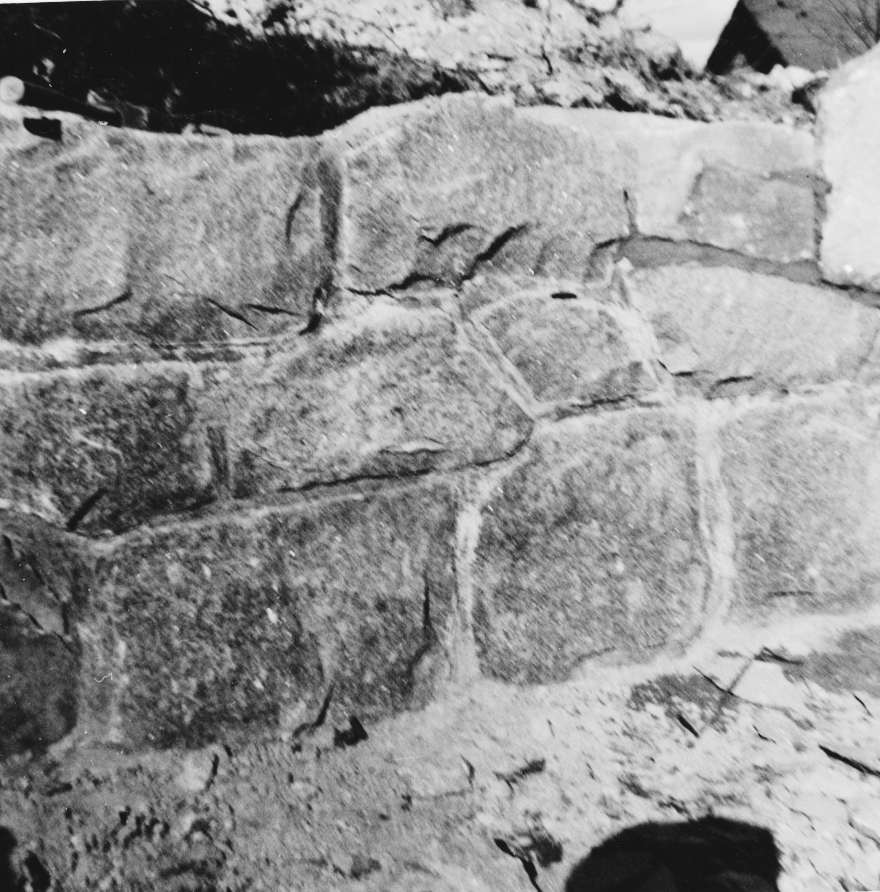 The local men brought in the foundation stones (reddish-grey granite). They knew their trade. 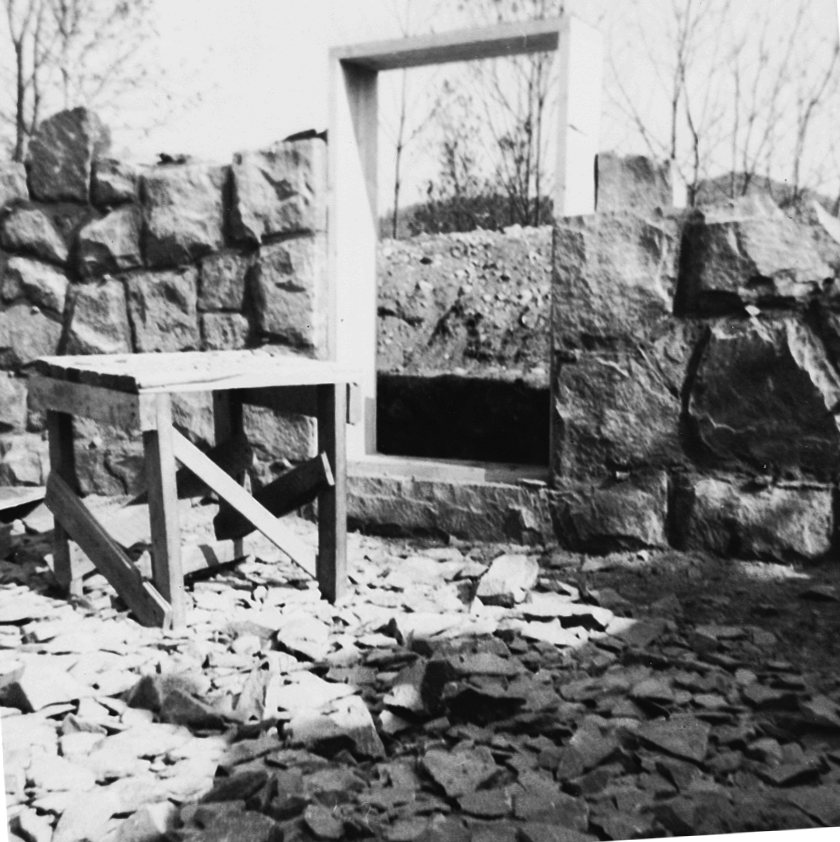 East doorway at ground level into the basement 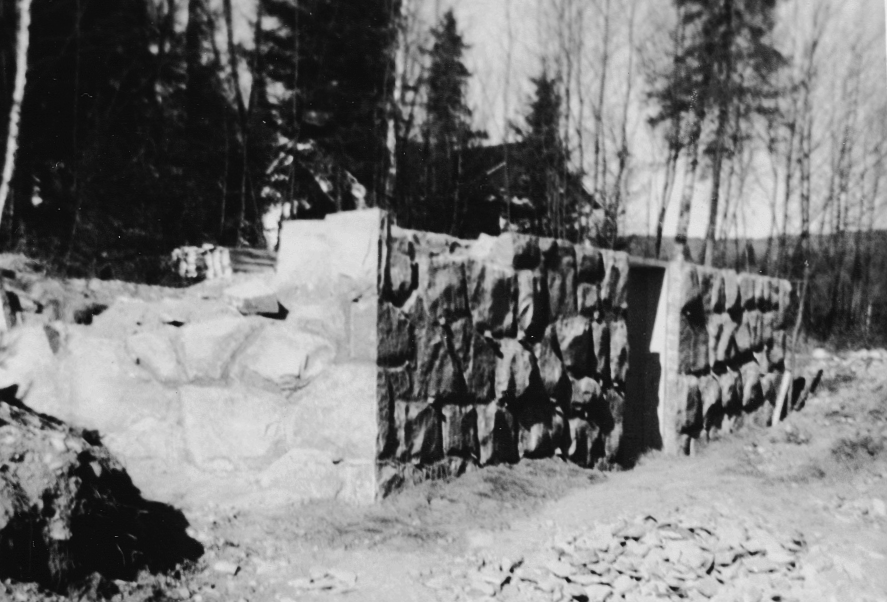 Showing east doorway into the cellar 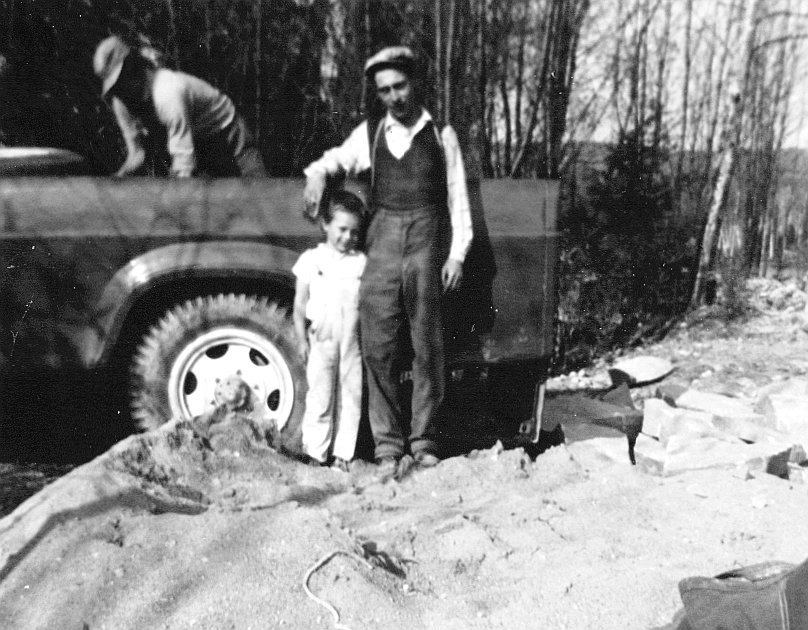 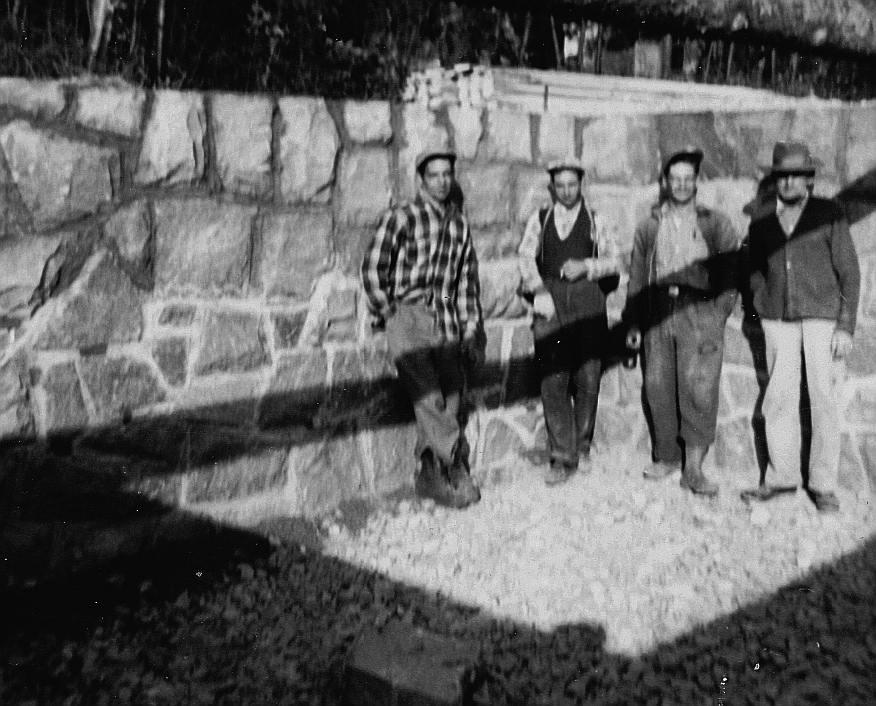 Eugene Plouffe and his men However, we are not yet done for the season ...
So that snow and ice don't ruin all the high-quality stonework, the calendar above anticipates a temporary roof for the winter .. coming in the next posting.