My father's photo album narration is in blue. 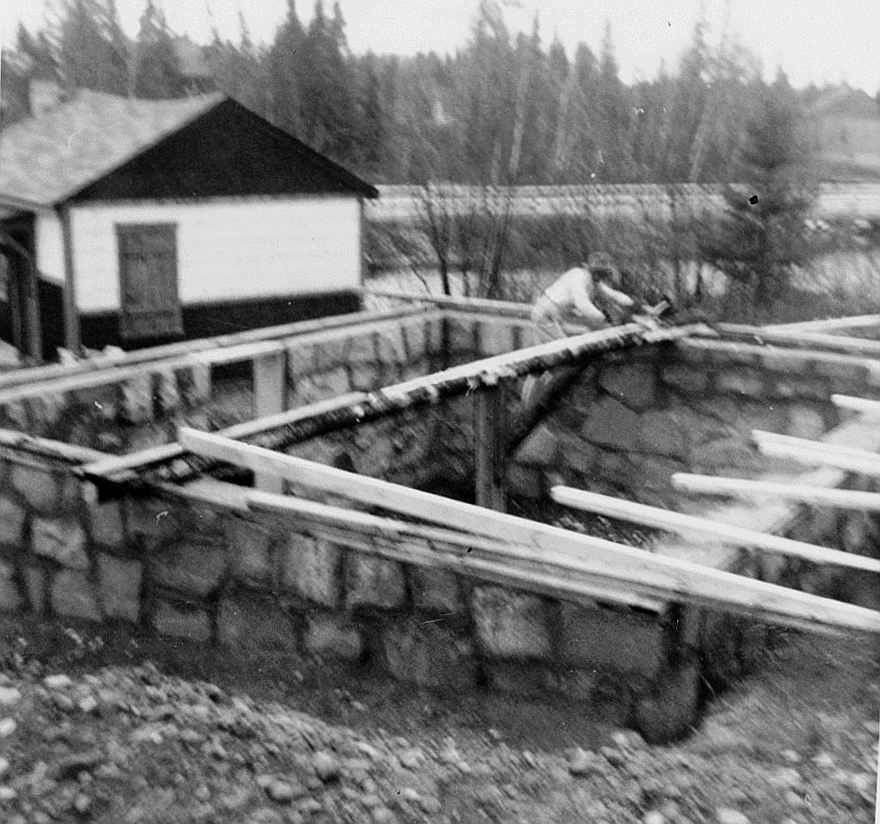 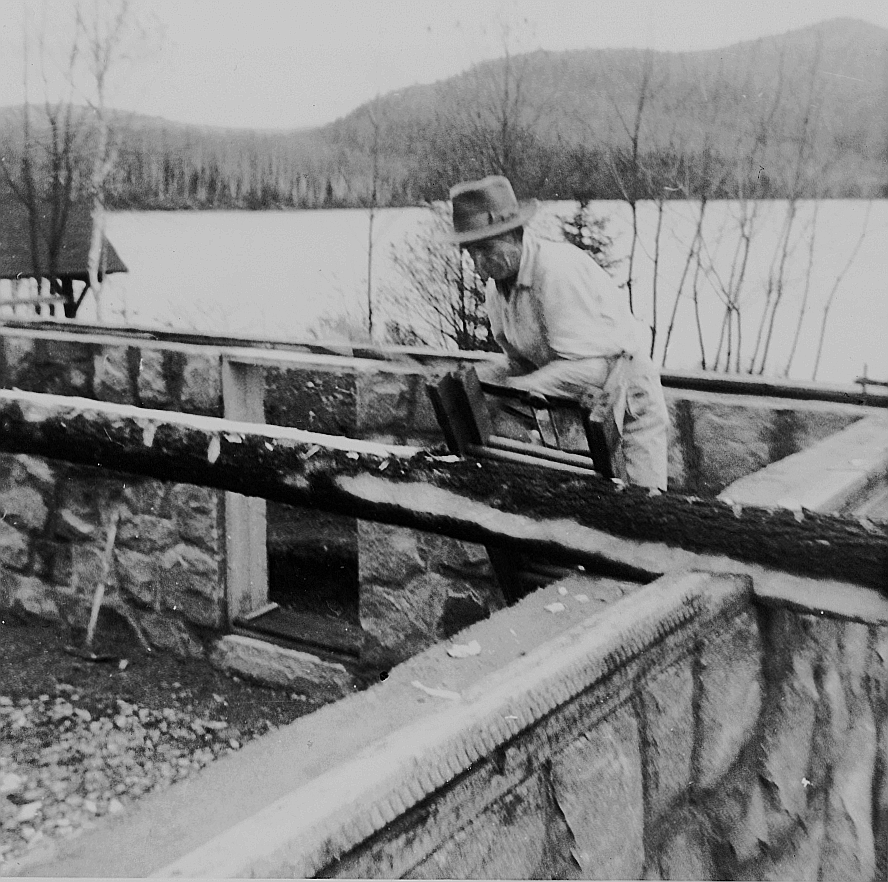 Guy Jolin is using an axe to flatten the ridge beam to receive the temporary rafters. 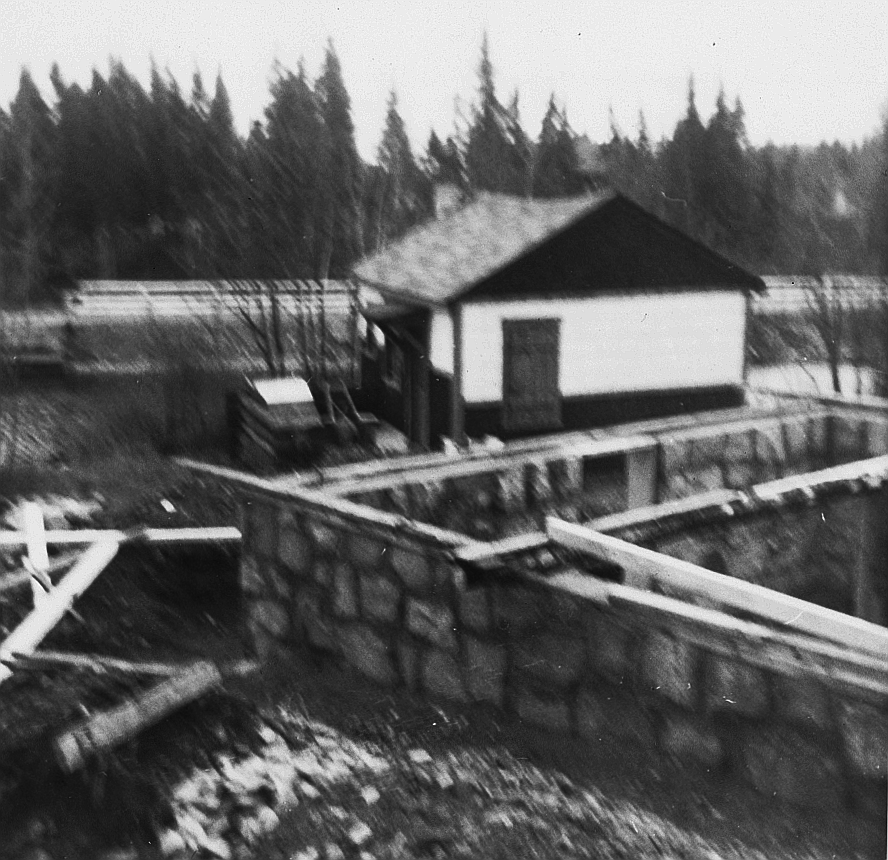 This photo shows the new foundation, the old cabin and the public boat ramp beyond.
(Sometimes my grandfather's shutter release technique combined with the slow shutter to produce blurred photos.) 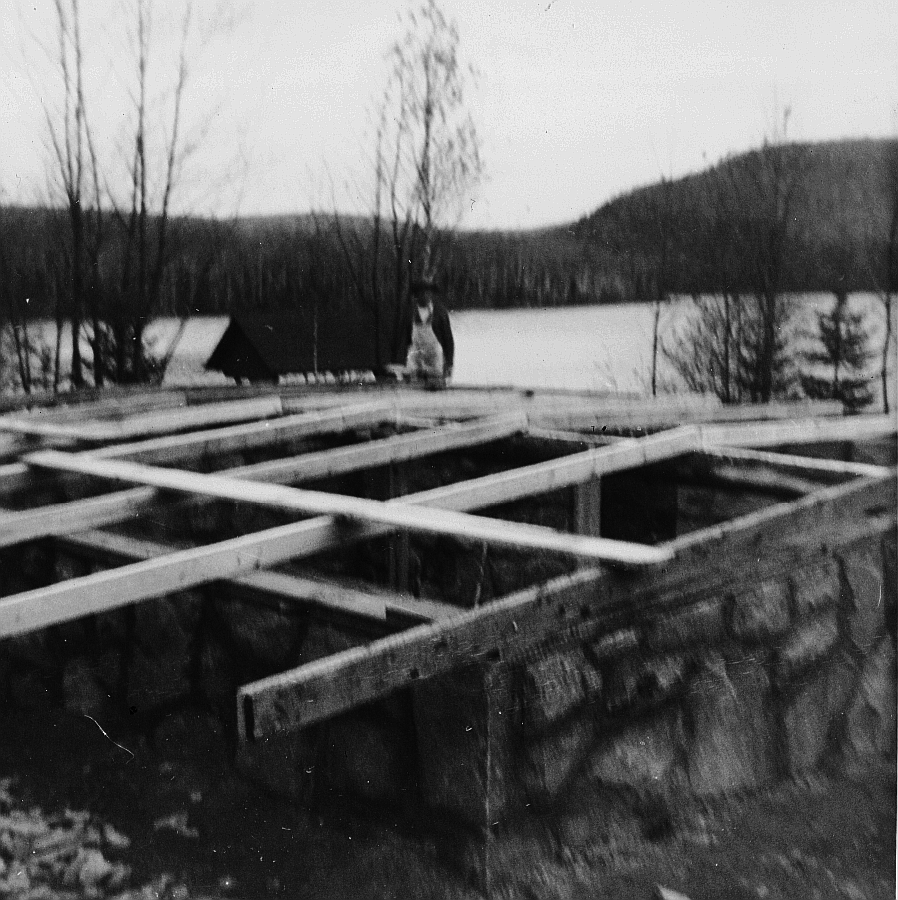 The rafters are in place, ready for the 'roof decking'. 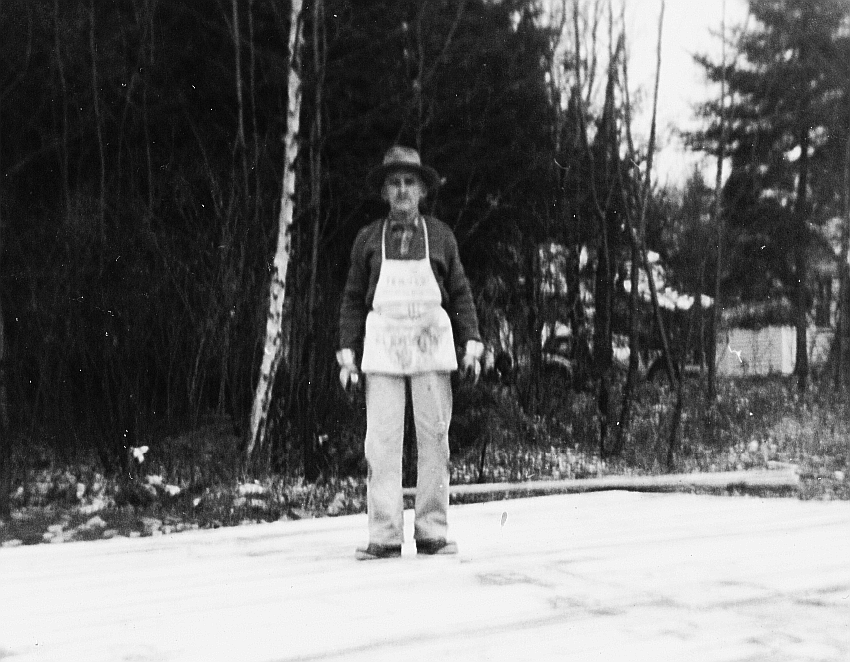 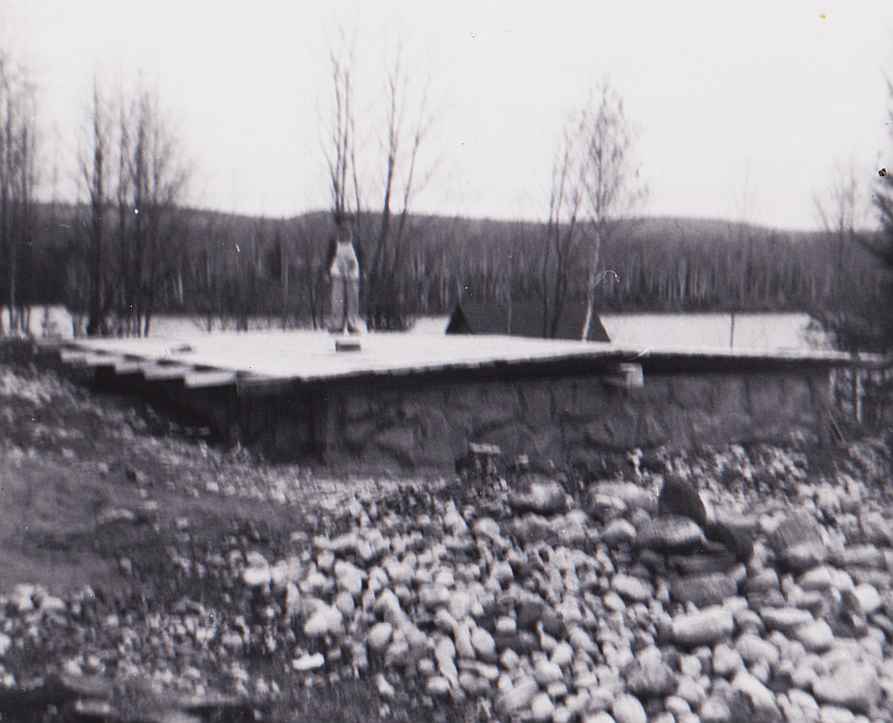 With the deck complete, tarpaper roll roofing sealed The Roof of Winter 1961-62.
Glacial gravel from the basement excavation is in the foreground. 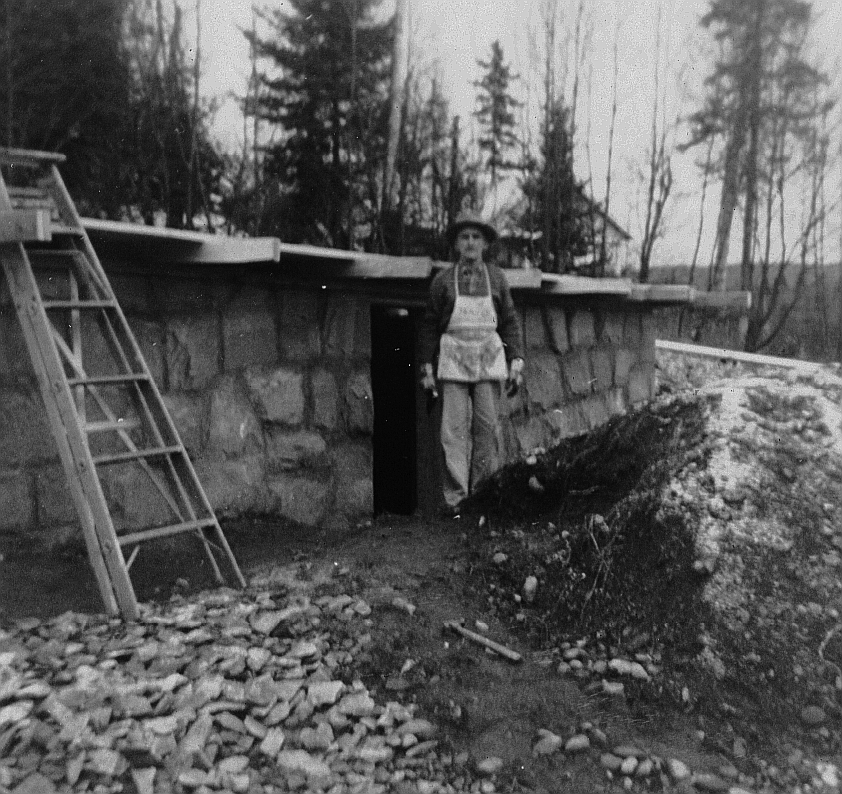 Guy Jolin stands on the 'mountain side' at the basement door.

Back in Montreal during the winter (below), my grandfather has worked out his bill of materials for the construction of the main floor of his new house. And herewith follows the actual bill.

The Protestant School Board of  Greater Montreal's pension plan
is stimulating the local economy for another season. 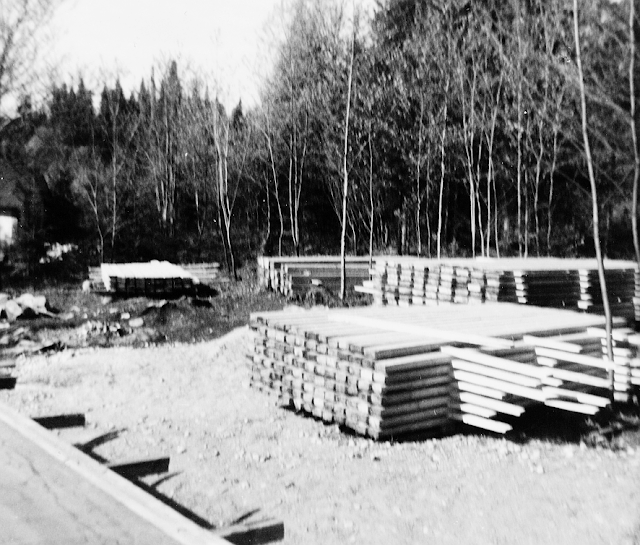 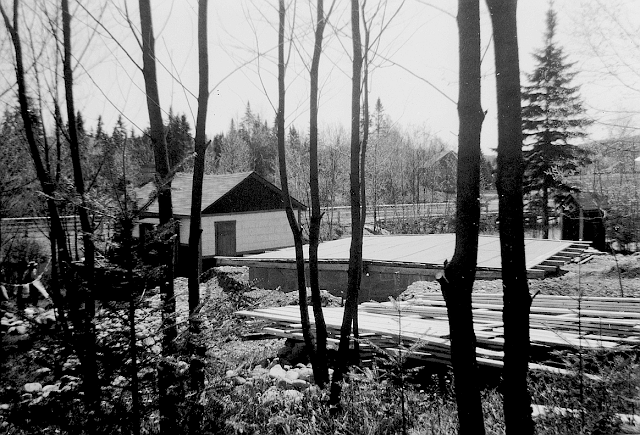 Left to Right: The cabin, the house, the washroom.
Behind is the public boat ramp again. 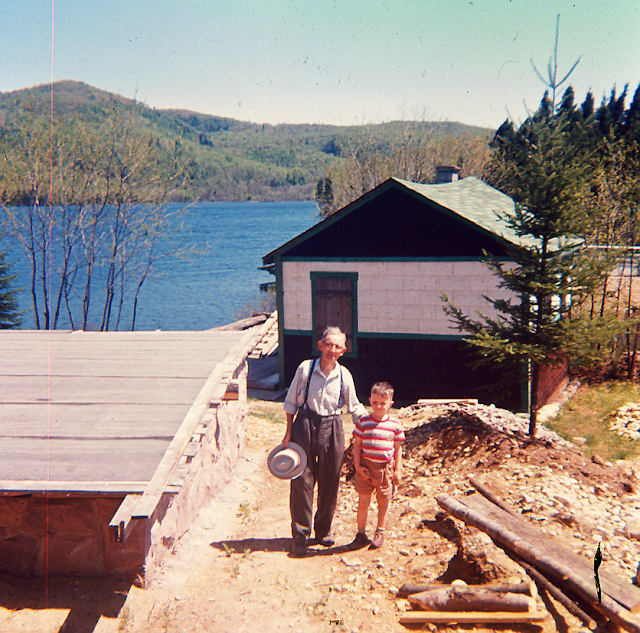 My father (using slide film) and I have arrived in the new VW Beetle for a visit. The winter roof on the new house foundation has survived the winter OK. Not having pets, I have adopted a couple of large pieces of glacial gravel. It was quite a warm day .. for May. I was posed for another photo on the tarpaper 'roof'  and it was particularly warm up there.


During the summer of 1962, the massive concrete foundations for the masonry chimney and for the floor supports will put in, By September 1962 you will see a real roof on a real house!

Before the Beatles first appear on Ed Sullivan, many things will happen!